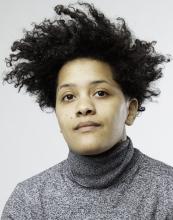 DISCUSSION WITH TSCHABALALA SELF + KEMI ADEYEMI

Kemi Adeyemi is Assistant Professor of Gender, Women & Sexuality Studies at the University of Washington. She is currently writing her book, Making New Grounds: Black Queer Women’s Geographies of Neoliberalism, which explores the sonic, affective, and embodied methods black queer women have for taking pleasure in the neoliberal city, and she is in the process of co-editing Queer Nightlife, a collection that documents the diverse expressions of queer nightlife worldwide. Her recent publications span academic and arts audiences, and include “Donald Trump is the Perfect Man for the Job” in QED: A Journal of GLBTQ Worldmaking; exhibition catalog essays for black is a color (Los Angeles), Impractical Weaving Suggestions (Madison) and Endless Flight(Chicago); as well as various interviews with, and writings on artists such as sidony o’neal, Brendan Fernandes, Adee Roberson, and taisha paggett. Adeyemi is Director of The Black Embodiments Studio, a graduate writing residency dedicated to developing arts criticism that queries how definitions of blackness are produced and expressed through visual, aural, and affective realms—engaging three domains that underwrite the physical and metaphysical dimensions of inhabiting black skin.