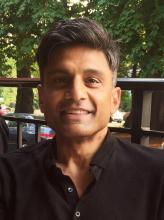 Neoliberalism Then and Now article by Associate Professor Chandan Reddy

This GLQ forum celebrates the twentieth-anniversary publication of Cathy Cohen's "Punks, Bulldaggers, and Welfare Queens: The Radical Potential of Queer Politics?" The forum opens with Cohen's reflection on the article she wrote twenty years ago. Other authors in the forum then ruminate on such topics as the potential erasure of the queer political history that the original article provoked readers to consider in the time during and since its printing, the haunting answer to the original article's haunting subtitular question—"the radical potential of queer politics?," and new political alliances that might fit under the rubric of queer in our contemporary moment.

Chandan Reddy is associate professor of gender, women, and sexuality studies and the Program for the Comparative History of Ideas at the University of Washington, Seattle, where he teaches courses on racial capitalism, settler and overseas colonialism, sexuality, and US modernity. He is coeditor (with Jodi Byrd, Alyosha Goldstein, and Jodi Melamed) of the Social Text special issue "Economies of Dispossession: Indigeneity, Race, Capitalism" (June 2018). His book Freedom with Violence: Race, Sexuality, and the US State (2011) from Duke University Press won the Alan Bray Memorial award for Queer studies from the MLA as well as the Best Book in Cultural Studies from the Asian American Studies Association, both in 2013. He is currently at work on a new book project titled "Administrating Racial Capitalism."