Embodied Writing: Gender and Class in the Graffiti and Murals of the 2011 Egyptian Revolution 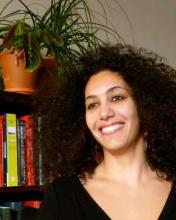 Much of the academic and popular literature on the graffiti and murals of the 2011 Egyptian revolution treats these works as illustrative documentation of the sociopolitical events of the revolution, neglecting to consider this visual culture as an active participant in shaping revolutionary discourse. Moreover, this documentation fails to contextualize these ephemeral works within their geographical location and date of origin. This dissertation asserts that these works of public participation are active sites of civic engagement, as graffiti and mural creators engage, negotiate, and claim public space with and against each other, the general public, and the state. Drawing on archival documentation of graffiti and murals, the project combines close iconographical readings with historical and contemporary contextualization of geographical location, while tracing the palimpsest layers of the revolutionary walls. In doing so, this examination of revolutionary visual culture underscores the ways in which access to public space is fashioned through gender, class, religious, and national identity. This dissertation follows an arc that begins in Chapter One by historically situating the production of visual culture as a tool of both political activism and nation-building. I demonstrate that some of these contemporary works challenge hegemonic state narratives and propose alternative national imaginaries, while at the same time perpetuating patriarchal nationalist ideologies that construct ideal Egyptian womanhood and manhood. Next, in Chapter Two, I turn to two frequently studied murals in order to argue that the choice of geographic site and their temporal context is paramount to our understanding of their meaning, as well as the role of urban visual culture in fashioning public space and access to the street. In Chapter Three, I consider what graffiti and murals reveal about sociopolitical tensions at the intersections of gender, religion, and class. Here I claim that graffiti and murals of the revolution challenge the regime by calling out its use of violence, yet at the same time, the visual iconography utilizes nation-state constructions of acceptable sexuality and gender roles. The final chapter, Chapter Four, focuses on so-called beautification projects where the state, the private sector, and private citizens each practice different levels of authoritarianism within the public space. Such projects, I conclude, transform the streets into sites of erasure in which the state enacts a politic of forgetting by covering up the visual culture of the revolution, thereby repressing the demands of the working-class under the guise of aesthetics. Grounded in feminist studies, cultural studies, and geography, this interdisciplinary project is situated in dialogue with postcolonial studies, urban studies, and political science. Mobilizing visual culture of the Egyptian revolution of 2011 as a case study, this dissertation stakes out a broader argument about the necessity to interrogate the nation-state as a basis for collectivity if we are to truly dismantle the hegemonic national narratives that bind women, rural peoples, and the working-classes into the margins and, in turn, produce other emancipatory imaginaries.

Browse by fields of interest: