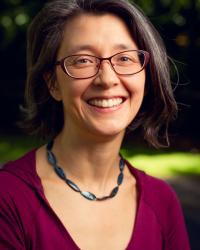 Sasha Welland is Associate Professor of Gender, Women & Sexuality Studies, Adjunct Associate Professor of Anthropology, and China Studies faculty member. Her first book, A Thousand Miles of Dreams: The Journeys of Two Chinese Sisters (Rowman & Littlefield, 2006), traces the social history and border-crossing lives of two “modern girls,” a writer and a doctor, who emerged from China’s early twentieth-century women’s movement. Experimental Beijing: Gender and Globalization in Chinese Contemporary Art (Duke University Press, 2018) is an ethnography of Chinese contemporary art as a zone of cultural encounter, in which post-socialist revaluations of rural and urban space, public and private boundaries, and masculinity and femininity are represented and questioned. Her current research on embodied ecologies, rooted in her hometown of St. Louis, examines the entanglement of military and medicine, nuclear colonialism and racial capitalism in the Anthropocene production of everyday carcinogenic relations. An editorial board member of Journal of Visual Culture, Welland has published in Cultural Anthropology, Feminist Studies, positions: asia critique, Signs: Journal of Women in Culture and Society and Yishu: Journal of Contemporary Chinese Art. She has curated feminist art exhibits in Beijing, Shanghai, and Hong Kong.

Sasha Welland is in dialogue with:

Michelle Habell-Pallán's humanistic and cultural studies work on race, gender, and sexuality through expressive culture. While Michelle focuses on music and Sasha on visual art, they share together with Monica De La Torre and alma khasawnih an interest in how cultural production shapes social categories and is deeply enmeshed in social, political, and economic relations and struggles, in North America, China, and the Arab World.

Luana Ross, Angelica Macklin, and Nicole Robert around the use of visual methods, be those documentary film or museum curation, as part of feminist research and activism.

Priti Ramamurthy, Chandan Reddy, and Amanda Swarr on questions related to transnational feminist theory and activism such as: How can we connect the scholarship and activism of feminists working in various contexts to ask new questions about the transnational discourses of survival and rights—often posited as the contemporary modes that have replaced the twentieth-century one of revolution? What are the methodological and epistemological contributions and contradictions of feminist activists and theorists where they come together in praxis?