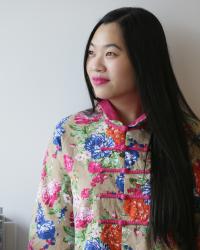 Christina Yuen Zi Chung is a writer, translator, and PhD scholar in Feminist Studies at the Gender, Women, and Sexuality Studies Department of the University of Washington.  Born in Hong Kong and raised in Shanghai, Singapore, and Vancouver (Canada), Christina has had an international upbringing and is fluent in Cantonese, Mandarin, and English as a result. She received her first degree at the University of Edinburgh, where she achieved an MA (Hons) in Archaeology and was awarded the R. N. Wardrop Prize in Archaeology. Her MA thesis is based upon theories on personhood drawn from the subfield of gender archaeology, and explores how graffiti could be examined in the archaeological record as a means of expressing personhood beyond the grand narrative of historical norms.

Upon graduating in 2009, Christina returned to Hong Kong and worked with the Asian Cultural Council (ACC), a private, non-profit arts organisation that provides fellowship grants for arts professionals to pursue research-based cultural exchange programs in the U.S. and in the countries of Asia. During this time, Christina received her second degree, obtaining an MVA (Master of Visual Arts) in Art and Culture (Theory and Criticism) from Hong Kong Baptist University in 2014 with support from the 2012 Hong Kong Arts Development Council Art Administration Fellowship. Her MVA thesis is titled: “The Silent Half of the Sky: Contemporary Mainland Chinese Feminism and Feminist Art in the Case of Two Artists,” which explores how gender and feminism is expressed through Chinese contemporary art at its present time, and how it may be an avenue for furthering discourse on gender and feminism in Mainland China. Her thesis received the 2014 Master of Visual Arts Best Thesis Award, awarded by the faculty of the Hong Kong Baptist University Academy of Visual Arts with recommendation from an external art specialist.

Christina joined the Gender, Women, and Sexuality Studies Department at the University of Washington in 2016 with support from the University of Washington Top Scholar Award, and has since been developing research on a decolonial feminist analysis of visual art that is currently being produced in Mainland China and Hong Kong. Utilising a “Transectional Analysis” method that she has fashioned for her research, she seeks to explore the complex, gendered socio-political relationship between Hong Kong and Mainland China through its contemporary art production, and to illuminate a feminist perspective that is often elided in related discussions. In 2017, her essays on the Mainland Chinese curator Liao Wen and Taiwanese visual artist Lulu Shur-tzy Hou were published in the book: “Creating Across Cultures: Women in the Arts of China, Hong Kong, Macau, and Taiwan,” which featured the stories of 16 leading Chinese women artists, written in English to introduce their lives and works to a wider, international readership.